See the top news on Matrimony.com

TECH CRUNCH - Schmooze is designed to match users with like-minded people who want to make each other laugh. To use the app, a person swipes right to like, left to dislike, and up to love memes from a selection curated via AI. Match suggestions will pop on the screen based on meme choices, and the person can select either "Snooze" or "Schmooze." Today, Schmooze launched a new feature called "Schmooze Flirts" for users to share memes with their matches. Vidya Madhavan and Abhinav Anurag founded the startup and beta-tested it at Stanford University. In March 2021, Schmooze came out of beta. The dating app has grown to 50K users. The company raised $3.2M in seed funding.

See the top news on Schmooze 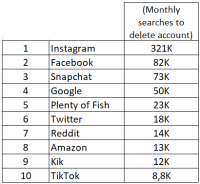 DIGITAL JOURNAL - A new U.K. survey finds that the majority of respondents want to delete their Instagram accounts. Plenty of Fish takes fifth place. It's the only dating app in the top ten, with Tinder narrowly missing out in 12th place.

CEO of Lovoo Is Stepping Down

LINKEDIN - Anna Maria Wanninger, the CEO of Lovoo, will be stepping down as CEO. She will remain at the company till the end of this year to ensure a smooth handover with the new management team. Claudio Di Vincenzo and Brad Richards, as well as Parship Group CEO Marc Schachtel and CMO Herbert Murschenhofer will now be managing directors at Lovoo.

See the top news on Lovoo

Tinder Turns 10: What Have We Learned From a Decade of Dating Apps?

THE GUARDIAN - A decade ago, online dating existed through sites such as match and OKCupid tended to attract older users, and had a stigma. Apps like Grindr (launched 2009), and Tinder (2012) radically changed online dating. Emily Witt, the author of Future Sex, a book that examines sex in the internet age, tells Nosheen Iqbal about the origin story of Tinder, meeting the founders, and why it was such an instant success. Dating apps have grown in response to a culture where people are single longer and a changing sexual morality that's open to different kinds of relationships.

Listen to the podcast here

by Nosheen Iqbal
See full article at The Guardian

Mark Brooks: Niche dating apps do well to focus on lifestyle, religion, geographic locations...and on occasion showstoppers. This is a good example of a showstopper criteria.

MEDIA POST - Bumble has teamed with Black-owned creative agency 19th & Park and singer/actress Teyana Taylor's all-women production company, for "Luv2SeeIt," a YouTube series about Black dating that will debut six 20-minute episodes every other Wednesday through Oct. 19. The first episode is up now. Taylor will interview Black artists, actors, athletes and entrepreneurs about relationships, sex/intimacy, red flags for dating profiles, and dating after a loss.

See the top news on Bumble

VERDICT.CO.UK - The Right Stuff first hit the news in January following a $1.5M seed round from Thiel. At the time, John McEntee, the former Trump political aide behind the company, said The Right Stuff aimed to launch in the summer. Ryann McEnany, the younger sister of former Trump White House secretary Kayleigh McEnany, stars in the video and said that The Right Stuff will launch in September. The app is invite-only and free to use, at least for the basic package. The video also showcases how conservatives can create conversation starters by filling in different prompts. In one prompt shown in the video, it says "Alexa, change the…" to which fingers supposedly belonging to McEnany type in and finish the sentence with the word "president". The Right Stuff isn't Thiel's first conservative tech investment. He has also injected dosh into the YouTube-like video-sharing app Rumble, which has become a hit with conservatives because it has looser content moderation rules, as Business Insider reported.

See the top news on The Right Stuff

OPW - The next Global Love Conference is taking place in London, on the 21st of September 2022. Early-Bird tickets are available now for 1 week only. Find out more here.